What are Genes, DNA, and Proteins?

What are Genes and DNA?

The estimated number of cells in the human body ranges from 5 billion to 200 trillion (1).

In the nucleus of each cell there are 23 pairs of chromosomes, i.e., a total of 46 chromosomes. Each chromosome is comprised of tightly-coiled DNA.

The figure depicts the relationship between genes, DNA and chromosomes (2)

An important property of DNA is that it can replicate, or produce copies of itself. Each strand of DNA in the double helix can serve as a template to duplicate the sequence of the bases. This is critical when cells divide because each new cell must have an identical copy of the DNA present in the old cell.

Proteins are very important molecules and have many critical functions in the cells of the body. Proteins are comprised of smaller molecules called amino acids. In humans, there are 21 proteinogenic (protein creating) amino acids involved in the biosynthesis of proteins. A protein is formed from a sequence of hundreds up to thousands of amino acids. Shorter sequences of amino acids are termed polypeptides; however, in this context these are also regarded as peptides. The sequence of amino acids determines the unique three-dimensional structure and specific function of each protein. Proteins perform most of the activities in the cells and the body and are involved in different functions. Examples of protein function are as follows: 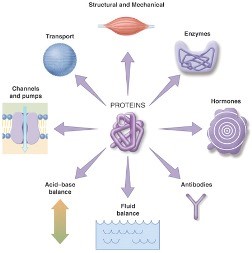 How are Proteins Produced in Cells? 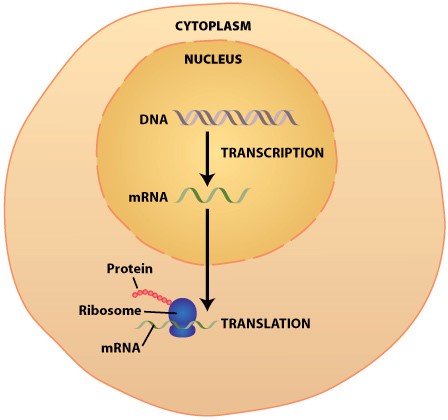